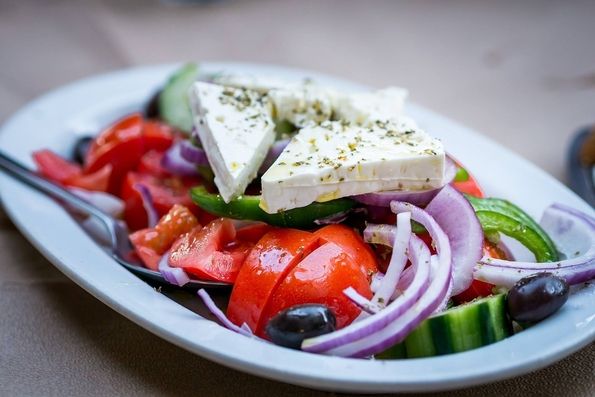 Gourmet is not something that most people associate with Greece. Retsina and a souvlaki kebabs accompanied by fresh tomatoes, heaps of Feta cheese and a bowl of olives immediately spring to mind and are much more associated with this Leventine land.

We have always mentioned to our more gastronomic guests that the culinary delights of Greece are based on simple fare. The taste of a juicy tomato the size of a grapefruit, skinned and drowned in lashings of olive oil, a sprinkling of wild thyme and the crunch of sea salt, mopped up with some fresh bread, warm from the oven. Or the explosion of the sea as you crunch on lightly fried baby squid enhanced with the zest of freshly squeezed lemon.

Towards the end of last year we visited a fabulous restaurant in Athens. It was full of creativity and sensuous delights and although it was towards the more expensive end it was totally worth paying the extra. Tucked away in a corner of Keramikos we sat in the corner of the ‘Funky Gourmet Restaurant’. The food was served in a theatrical manner and as we bit into something that resembled an olive, served hanging on something that looked like a miniature olive tree, the initial taste was chocolatey with a salty after-taste, the combination of which lingered on the palette. We began to think that perhaps there was more on offer than the familiar flavours of Greece. It set us thinking…

Apart from the fact that Lord Byron met his end in the salt marshes of Messolonghi, nothing of worth came from this mosquito infested area on the west coast of mainland Greece, until one discovers the taste of Avgotaracho.

Made from the roe of a flathead mullet that comes to spawn in the lagoon once a year, it is salted and then sealed in beeswax making it a rare delicacy with a fine aroma. Best accompanied by a glass of Sparkling Moschofilero and served as an appetizer.

Grown on the outskirts of Western Macedonia, the quality of the saffron is considered one of the best in the world. The area has one of the lowest densities of population in Greece.

The Kozani Saffron Producers Cooperative was formed in 1971 in order to take advantage of the harvest and keep the local community alive. In 1992 the cooperative started to package and sell their saffron as a high quality product direct to the consumer. Kozani Saffron can fetch up to 1500 euros/kilo and the production is between 6 and 7 tons per year. The saffron is known for its antioxidant, antithrombotic, and anticancer qualities. It lends its golden colour and subtle aroma to risottos, sauces, and pastries.

Refusing to grow anywhere else in the world the Mastic tree found only on the south coast of Chios island produces a resin that contains 80 ingredients that have become famous for their therapeutic qualities from treating various types of cancer to lowering cholesterol.

Mastic gum was even sold to the Sultan’s harem as a breath freshener. Mastic is used for flavouring the liquors of Mastichato and Masticha and with its unique aromas transforms pastries and savoury dishes into gourmet delicacies.

Leonidio is the capital of Tsakonia and home to some 7000 Peloponnesians who love food. The eggplant owes its deliciousness to the microclimate of the area where it is not only eaten in its many more familiar forms - ‘imam baildi’, ‘melitzanosalata’ and ‘moussaka’ but also it is preserved, pickled, distilled into liquor and made into ice-cream!

The rarest type of honey in the world is also found in the Peloponnese in the central region of Arcadia. Mainalo is a mountainous place where fir tree forests are abundant and it is here that the vanilla flavoured honey can be found.

It is exquisite with yeast bread baked in a terracotta oven, some spicy Graviera cheese and a glass of chilled white wine.

Greece is home to many more delicacies and culinary delights. I suppose our initial thoughts are still correct and the ‘gourmet of Greece’ is to be found in the simple things and wonderful produce that are unique to this very special and varied place.

Here at Pretty Greek Villas, we use cookies to provide you with a bespoke and tailored online experience, whilst allowing us to measure the performance of our website. By continuing to use this website, you are agreeing to Pretty Greek Villas's placement and use of cookies described in our Cookie Policy. Learn More here.