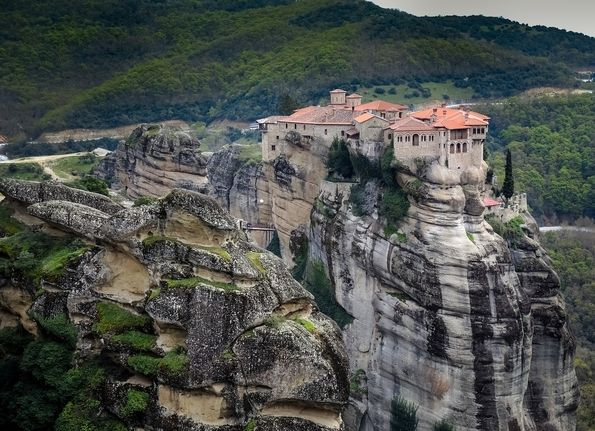 Every now and then you discover a place that leaves you in absolute awe. One of these places is Meteora. The name Meteora means ‘suspended in air’.

If you haven’t explored Central and Northern Greece, you are missing some of the most breathtaking, mind-blowing, ‘WOW’ provoking sights that Greece has to offer. If you think that whitewashed houses and beautiful beaches are what Greece is all about, it is time to rediscover.

After winding down through the Pindos Mountains and beginning your cruise through the Peneas valley, all of a sudden, there it is! Skyscraping, rock towers, 400 meters high soar out of the ground supporting historic monasteries at their peaks, like great arms reaching up exalting what they hold in their palms.

Experts suggest that these sandstone and conglomerate pinnacles were created 60 million years ago from a combination of river erosion that created the rising formations and seismic activity that split them into separate pillars.

Monks have inhabited these rock formations since the 11th century. They first dwelled in the natural caves that were accessible with ladders.

As monks became increasingly fearful of the political instability during the Turkish occupation, they sought out a more secure recluse and moved upward. By the 17th century, they had built 24 incredible monasteries on top of the pinnacles. How they managed to do so under such impractical conditions is still dumbfounding. The pulleys and baskets used to transfer people and goods up and down the rocks are still visible and some still functioning.

Today, six monasteries remain working, four men’s and two women’s, and you are actually allowed to go inside for a trip back in time. Roads now take you much closer to them and over the years, steps have been carved out of the rocks for safer, easier access. It can still be quite a climb, so be prepared for some exercise. There is a conservative dress code to enter the monasteries. Women are required to wear long skirts and most monasteries provide wrap around skirts at the entrance that women can put on over their clothes.

Below the monasteries is the touristy town of Kalambaka. If you are after a more authentic experience we recommend avoiding Kalambaka and heading over to nearby picturesque villages, such as Kastraki, that have much more charm. Kastraki village is just a couple of kilometres from the monasteries and sits among the rock giants, peeking out of the hillside through the trees. The traditional village homes and inns are built from stone and wood. Narrow cobblestone pathways lead you through the village where you will discover small chapels and Kastrakis’s own hidden treasures. The town is also known for its high-quality meat and offers an abundance of tempting places to stop for classics like ‘kontosouvli’ and ‘kokoretsi.’

When we visited the area we stayed at the Guesthouse Sotiriou. It is a wonderful building with wooden staircases and ceilings, beautiful balconies, and cosy fireplaces and has all the characteristics of a traditional home and provided excellent service.

Meteora is also an internationally recognized haven for rock climbers, offering routes with varying degrees of difficulty. The nearby towns of Rizoma, Pyli, and Mousaki also have additional rock climbing routes. Hikers, as well, can find several worthwhile paths around the area.

UNESCO has declared Meteora as a world heritage site. It is not just an impressive part of Greece, but a ‘must see’ destination for any traveller. It is not often that we are able to get up so close to such a historically significant wonder of the world.

If you come to Greece, you should definitely make a point to visit. Your fascination with this spectacular place will stay with you long after you leave.

Here at Pretty Greek Villas, we use cookies to provide you with a bespoke and tailored online experience, whilst allowing us to measure the performance of our website. By continuing to use this website, you are agreeing to Pretty Greek Villas's placement and use of cookies described in our Cookie Policy. Learn More here.